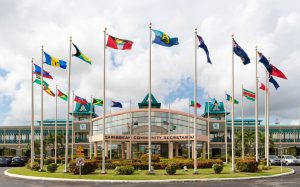 Some Caribbean Community governments have begun to take drastic measures to prevent any cases of the deadly Corona virus raising its head in this highly travel-sensitive region, with some refusing entry to passengers arriving from China and Hong Kong.

In the past week, authorities dressed from head to toe in hazardous material suits have in many parts of the region taken the ultimate precaution by quarantining and turning away passengers arriving from that part of Asia.

As an example of the tight restrictions in place, Jamaican authorities at the weekend rejected requests for landing of 19 Chinese nationals who had arrived at the mainland in the capital, Kingston. At midweek, medical teams at Trinidad’s Piarco International Airport turned away a Guyanese female transiting the country from Hong Kong out of severe precaution.

The Guardian newspaper quoted Chief Medical Officer, Roshan Parasram as saying that while the woman showed absolutely no symptoms of the virus she was rejected because of current travel restrictions from China.

“I don’t know what flight she came in from but I only know of that woman who came in from Guyana and she would have spent some time at our airport waiting on departure back to the port of call,” he said. “I believe she would have gone through other territories, including Hong Kong, New York and Guyana and then to Trinidad. Based on our travel restrictions for persons leaving China within 14 days of departure, she was returned to the last port of call based on the cabinet note and the immigration laws.

Jamaican Health Minister Chris Tufton, meanwhile, said the 19 were screened, placed in quarantine and put back on an outbound flight on Saturday as regional health officials work overtime to keep the virus out of the tourism dependent region.

And Jamaican national who also flew in from Asia was immediately placed on lock down and will be monitored continuously until being cleared by doctors.

“We have no confirmation yet of coronavirus, but she was held out of an abundance of caution. The patient who landed in Jamaica on January 30 reported no history of cough, sore throat, shortness of breath, vomiting, muscle pain or diarrhea. Further, the patient’s vitals, including blood pressure, pulse rate, blood oxygen, and temperature all registered normal. The patient does not, therefore, meet the case definition for novel coronavirus,” the health ministry said in a statement. “However, as a precaution, the patient has been put in isolation and will remain in isolation until the symptoms abate,” Minister Tufton said.

As an indication of how panicky the region is, regional health ministers convened an emergency Skype meeting on Monday to develop a harmonized response to the global epidemic. One thing clearly emerged from the meeting and that is the virus must be prevented from touching down at all costs.

In that regard, several Eastern Caribbean states have refused to allow the European-owned Aida Perla Cruise ship to dock after reports surfaced some of the more than 2000 passengers on board had reported respiratory tract infections. Authorities in Antigua, St. Lucia and Dominica said ship officials had not provided medical teams with sufficient information in a timely manner to allow the vessel to berth at ports.

But begging to differ and to take a different route, Vincentian Prime Minister, Ralph Gonsalves did approve a berthing of the ship, saying there are other ways than outright denials of landing.

“We have to act sensibly with the protocols and don’t panic. “There were 23, I think 23 persons, who had some kind of a virus. But they were isolated on the ship. They were crew members and some passengers. Port Authority simply contacted, as we will do always, the public health, the chief medical officer, medical officer of health. All the entities involved and dealt with that problem so that you allow those who wanted to come off and could come off, but those who had to be isolated were isolated on the vessel,” he said.

Until the spread is contained, regional authorities have vowed a full court press of surveillance to ensure the virus stays out of the region. The issue will likely be an agenda item at CARICOM leaders meeting in Barbados later this month.