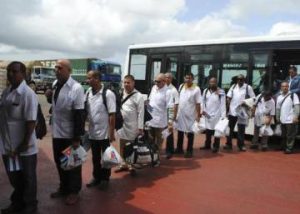 AS Cuba’s “army of white coats” makes headlines around the world with countries reeling from the onslaught of COVID-19 calling in reinforcements, Jamaica readies to allow 140 of the Spanish-speaking island’s health care professionals to engage with the public health system this weekend.

Minister of Health and Wellness Dr Christopher Tufton, during a digital press conference on Wednesday, announced that the Cuban health professionals who arrived in the island on March 21 and are now in quarantine, are set to join the country’s COVID-19 response “to bolster our front line defence”.  The Cuban team includes 90 specialist nurses, 46 doctors, and four therapists.

Besides Jamaica, Cuban health professionals have been deployed to at least 12 other countries to aid their COVID-19 fight, and according to Ricardo Calvo Águila, counsellor at the Cuban Embassy in Jamaica, that number could change.

The Henry Reeve International Medical Brigade, according to the Pan American Health Organization (PAHO), was established by more than 1,500 Cuban health professionals trained in disaster medicine and infectious disease containment. It is integrated into Cuba’s Ministry of Public Health, which has more than 40 years of medical aid experience, with its emergency response teams of 250 specialised physicians, nurses and other health workers constituting the single largest medical operation on the ground in Sierra Leone, Guinea, and Liberia during the height of the 2014-16 West Africa Ebola outbreak, PAHO said.

Even as Cuba battles COVID-19 on the home front — recording 186 cases and six deaths as at April 1, according to the World Health Organization — Calvo pointed out that sending health care professionals to work in other countries is not new.  In fact, the counsellor said, over the years Cuba has had medical collaborations in 164 countries.

He said, too, that statistics from Cuba’s Central Unit for Medical Cooperation show that, as of February 2020, that country had 28,729 health professionals working abroad. And, Calvo did not stop there.

“In May 1960, only one year after the triumph of the revolution, Cuba sent an emergency medical brigade, equipment, and supplies to Chile, [which was] affected by an intense earthquake that left thousands dead.

“On May 23, 1963, Cuba started its International Medical Collaboration with permanent brigades, when 55 collaborators departed to Algeria to provide their services for a year. A few months earlier, while announcing the decision, Fidel [Castro] said: ‘I am sure there will be no lack of volunteers… Today we can send only 50, but in eight or 10 years, who knows how many, and we will be helping our brothers…’,” he said.

Calvo explained to the Observer that despite being involved in their own COVID-19 fight, Cubans believe that to be internationalists they have to pay their own debt to humanity.

“Henry Reeve himself, whose name is proudly carried by the International Contingent of Doctors Specialized in Disaster Situations and Serious Epidemics, was a New Yorker internationalist who reached the rank of brigadier general of the Cuban Liberator Army, and died fighting for the freedom of our homeland.

“The Cuban people have always shared what they have, be it a lot or a little,” he continued. “Today, despite being a small country, poor and blocked for more than 60 years by the greatest military power in history, Cuba has managed to gather a powerful army of more than 100,000 active doctors, [which] means [there are] nine doctors for every thousand inhabitants.”

Emphasising that Cuba’s “army of white coats is much more powerful than any other, because it carries a message of life, peace, and love to the world”, the counsellor at the Cuban Embassy in Jamaica asked: “Don’t you think it’s a moral duty to share our doctors with those brothers and sisters who need them? Don’t you think it’s worth risking one’s life in exchange for spreading that message?”

Asked how the Cuban medical missions are funded, Calvo said: “I’m sorry, I don’t have that information.”

Since the new coronavirus was first identified in December 2019, there have been more than 1,000,000 cases, with more than 198,000 recoveries and just over 51,000 deaths worldwide, according to Johns Hopkins University.