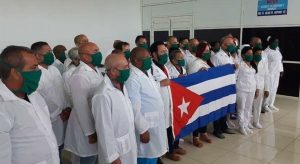 Racing to prevent the collapse of their healthcare systems overwhelmed by the coronavirus pandemic, vulnerable Caribbean nations last month turned to a neighboring country in a desperate plea for help.  They didn’t look to the United States. They asked Cuba.

Over eight days the Caribbean island, which has remodeled medical cooperation into its most profitable source of revenue, sent at least 473 doctors, nurses and other healthcare workers to eight Caribbean nations in what appears to be one of the island’s largest and fastest deployments to the region in the history of its “solidarity” medical missions.

The nations’ request for the doctors happened despite early warnings from the U.S. State Department about “exploitative conditions” in the Cuban medical program that the agency has called “abusive” on Twitter.

And the operation also put on display other regional frictions, as some Caribbean officials who have been supportive of the Nicolás Maduro regime in Venezuela turned a blind eye to the fact that some of the doctors traveled in planes provided by the Venezuelan airline Conviasa, currently under U.S. sanctions.

“People are being pragmatic about it, and so what that means is if the U.S. offered help, they would take that offer too,” said Robert Maguire, retired director of the Latin American and Hemispheric Studies Program at George Washington University.

“The U.S. aid presence in the Caribbean has been pretty skimpy, compared with Venezuela, China,” Maguire added. ”This is not a surprise that the governments of the Caribbean would turn to Cuba for assistance; Cuba has a history.”

The largest groups of Cuban medical workers were sent to Jamaica (140), St. Lucia (113), and Barbados (101).   Smaller groups traveled to St. Vincent and the Grenadines (16), Antigua and Barbuda (29), Dominica (35), St. Kitts and Nevis (34) and Grenada (5). The health workers sent to Barbados and Grenada, mostly women, are nurses. Still, other countries received a combination of physicians, nurses, and technicians who are members of a Cuban “international brigade” that specializes in disaster situations and epidemics.

They are among more than 1,000 healthcare workers that Cuba has sent to 18 countries on three continents since the start of the deadly pandemic, according to Cuban press reports and official statements.

Jamaica Health Minister Christopher Tufton told the Miami Herald that the 140 Cuban doctors and nurses were brought in to boost the country’s health staff for COVID-19. “We lose 500 plus nurses each year from mass recruiting” from other countries, he said.

The arrival of Cuban healthcare workers to help on the front lines of the pandemic is seen as such a godsend among Caribbean nations that Haiti’s foreign ministry hinted on Twitter that the country was getting more Cuban doctors. Foreign Minister Claude Joseph later clarified to the Nouvelliste that 348 Cuban doctors and nurses already in Haiti will now be deployed throughout the country to help with COVID-19 patients.

This is not the first time Cuba has offered medical aid to the Caribbean.  Antigua and Barbuda Prime Minister Gaston Browne said Cuba has been exporting its doctors and nurses for decades to help his country recover from hurricanes. Cuba has also provided scholarships for its nationals to study medicine in the island.

“We are friends of all and enemies of none. We are an extremely vulnerable micro state, and have little option but to accept assistance from all nations,” he said. “Those who would like us to do otherwise should undertake to fill the breach.”

The political message is clear, observers of the region say: Contrary to what the U.S. has been trying to demonstrate by having the doctors chased out of Brazil, Bolivia and other Latin American nations, Cuba’s medical brigades are still needed and appreciated.

Only five days earlier, the U.S. State Department’s Bureau of Democracy, Human Rights, and Labor was asking countries seeking Cuba’s help to “scrutinize agreements and end labor abuses” that have been associated with the island’s medical missions. According to several doctors who defected from those missions and documents disclosed in Brazil, the island’s government routinely pockets almost 80 percent of the money that countries pay toward doctors’ salaries, restricts their movements, and even pressures physicians to inflate statistics.  That message is not making headway in the Caribbean.

“We find it astonishing that this program, which has helped to deliver good healthcare services to our people, is conveniently characterized by others as human trafficking,” Browne told the Herald.

Browne said the Cuban doctors and nurses who arrived recently in Antigua and Barbuda get free accommodations, utilities, transportation and other benefits. “Those expenses would ordinarily take up about 50 percent of the income of a local nurse. They are quite happy.”

St. Vincent and the Grenadines Prime Minister Ralph Gonsalves said the Cubans are providing training and medical help: “We don’t take ideological positions on these things. We take a very sensible, human pragmatic position on these things.”

The Cuban healthcare workers in St. Vincent and Antigua arrived on planes provided by the Venezuelan airline Conviasa, currently under U.S. sanctions. On Friday, another Venezuelan flight also dropped off rapid testing kits for the governments of St. Vincent, Grenada and Dominica.

“You cannot sanction a commercial flight,” Gonsalves said. “This was a flight of mercy, bringing doctors and nurses to countries in the Caribbean.”

For the Cuban government, its long-standing medical diplomacy has paid off.  The aid requests have offered a lifeline to Cuban authorities struggling to provide food for the population as a perfect storm of state inefficiency, U.S. sanctions and a pandemic that shut down tourism — one of the country’s primary sources of revenue — came into full force.

In those circumstances, boosting the export of medical services — the country’s biggest source of revenue, accounting for $6 billion in 2018 — seemed the logical step for Cuban authorities. And with Brazil, Ecuador, and Bolivia canceling the agreements last year over criticism of the government’s labor practices, the island had a surplus of trained health workers that could quickly be redeployed.

One day after the Cuban government announced it was shutting down tourism on March 20, the news that Cuba began sending doctors to the hardest-hit Italian region of Lombardy made headlines around the world.

Three days later, Cuba’s foreign minister Bruno Rodríguez made a case for regional cooperation in a videoconference meeting convened by the Association of Caribbean States to discuss the response to the coronavirus. By then, five members of the association had already requested medical aid from Cuba, Rodríguez said.  The minister hinted that Caribbean nations could not rely on U.S. aid.

“We should not expect, much less be confident, that the rich and industrialized countries will come to save our peoples. Little assistance will come from the north,” he said.

The U.S. has provided financial assistance to some Caribbean countries. According to a State Department fact sheet, the U.S. gave $700,000 in health funding to Jamaica, $2.2 million to Haiti and $1.7 million to help governments in the eastern Caribbean to “scale up their risk communication efforts, water and sanitation, prevent and control infections, manage COVID-19 cases, strengthen laboratories, and surveil the spread of the virus.”