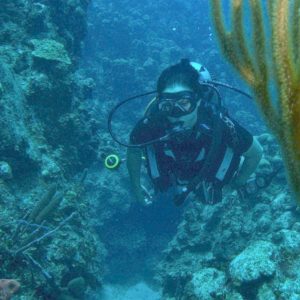 Doctors and scientists are learning every day about the harmful effects of COVID-19. The long-term impact of the disease on recovered patients is only slowly emerging.

First indications paint a devastating picture for a number of divers, who had seemingly recovered from the lung disease.

Dr. Frank Hartig, a senior physician at the University Clinic Innsbruck in Austria, has treated six divers who were infected with the coronavirus but had suffered only mild symptoms. None of the six had to remain in hospital and all recuperated at home.

CT scans of the patients’ lungs revealed such an extent of damage that it makes a full recovery unlikely.

“This is shocking, we don’t understand what’s going on here. They are probably lifelong patients,” he said.

Two of the six patients exhibited irritable lungs, similar to asthmatics. Two patients suffered a lack of oxygen supply indicative of a persistent pulmonary shunt. And scans of four patients showed significant changes to their lungs.

The images were so at odds with the healthy-looking patients sitting in front of him, Hartig said in the interview, he had to double-check with the X-ray department that the files had not been mixed-up.

The extreme cases prompted Hartig, an avid diver himself, to write an article for German-language dive publication Wetnotes to warn divers of the potential long-term health damage of the coronavirus.

In the article, the head of the accident and emergency department at the clinic in Innsbruck advises that divers who have contracted COVID-19 in the past must consult a dive physician before entering the water again, even if they only had mild symptoms.

Hartig said it is now certain that patients who feel fully recovered can still suffer from severe effects of the lung disease weeks and months later, prohibiting diving and many other forms of exercise.

Professional divers, like dive instructors or commercial divers, should do everything they can to avoid a coronavirus infection, he wrote.

One particular problem in severe cases appears to be related to the treatment with oxygen. In his article, Hartig outlines how many patients who were given oxygen saw their blood levels initially improve, only to suffer lung failure a short time later, forcing a transfer to the intensive care unit. Many doctors have the feeling that oxygen causes a cascading domino effect, he said.

Sensitivity to higher oxygen levels after COVID-19 can become a problem for divers who are using nitrox. This mixture of nitrogen and oxygen, sometimes called enriched air, uses a higher share of oxygen than in regular air, typically 32% to 36% compared to the regular 21%, to reduce some of the side effects of breathing nitrogen under water.

Scientific studies confirming these limited clinical observations are not expected before next year.