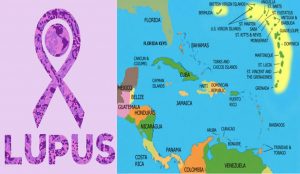 As one of a family of chronic autoimmune illnesses, lupus is extremely difficult to diagnose. It’s a major health annoyance for patients, a large percentage comprising women of African descent living in the United States, Latin America and the Caribbean.

‘There are men who are affected with lupus but mainly it’s women in their child-bearing years,’ explained Hazel Bierzynski, president of the Lupus Foundation of Grenada (LFG).

In lupus, the body’s immune system often becomes overactive and attacks its own healthy tissues, affecting many parts of the body such as the skin, joints, kidneys, lungs, heart and the brain.

Joint and muscle pain is often the first sign of lupus. This pain tends to occur on both sides of the body at the same time, particularly in the joints of the wrists, hands, fingers and knees. The joints may look inflamed and feel warm to the touch.

People living with lupus receive support from organizations like the Lupus Foundation of Grenada and the Lupus Foundation of America (LFA), which host various activities. On October 10, for example, the LFA held a ‘Walk to End Lupus’. It was a virtual event with the LFA saying, ‘every step and every dollar raised brings us one step closer to a cure’.

According to the LFA, its mission is ‘to improve the quality of life for all people affected by lupus through programs of research, education, support and advocacy’.

The LFG was founded by Bierzynski in 2002 and incorporated as, ‘The Marilyn Hurley Fund for The Lupus Foundation of Grenada Inc.’

Hurley, who was being treated in the United States for lupus, was Bierzynski’s sister.

‘Marilyn was diagnosed in 1979 and had three hip replacements,’ Bierzynski said in an interview. Hurley died in 1998. She was just 41.

One of Hurley’s best friends was Guyana-born Juneann McDonald.

The friendship began in Guyana, where Hurley spent time studying. ‘Marilyn was my best friend in high school,’ McDonald said.

Later in life, the United States became home to both Hurley and McDonald. And, it was in the US that both were diagnosed with lupus.

‘I was diagnosed about a year after Marilyn,’ McDonald disclosed. ‘As a child growing up in Guyana, I did have illnesses that were unexplained, including fever. On reflection, it was stress-related.’

Still in mourning at her sister’s 1998 death, Bierzynski – after numerous attempts at finding an appropriate medical specialist – was herself diagnosed with lupus. That was 24 years ago.

‘I was diagnosed by Dr Budhlall who was able to connect the dots much more rapidly. When I did get diagnosed, I was lucky enough that I was able to go to Washington and I saw Marilyn’s own rheumatologist who took care of me,’ said Bierzynski.

The LFG’s work is focused on education, awareness and support for Grenadians suffering the effects of lupus, as well as for people afflicted by other chronic illnesses and auto-immune diseases.

Its awareness programs include the annual observance of World Lupus Month in May, and monthly meetings featuring medical professionals, who address issues such as disease management, treatment options and the latest medical findings.

With the COVID-19 global pandemic limiting person-to-person interaction, the Lupus Foundation of Grenada has been using social media platforms, including Facebook and Zoom, to host seminars.

Among the LFG’s virtual seminars was one on ‘Hair Care Maintenance Advice for Persons Living with Chronic Conditions’; another on ‘How to Transform Your Health with Food’; and a third on, ‘Oral Health as it relates to Chronic Conditions’.

For people in Grenada and the rest of the Caribbean dealing with lupus, photo-sensitivity or sun-exposure is a challenge.

Among other challenges, said Bierzynski, is a shortage in the Caribbean, and especially in the sub-region of the Organization of Eastern Caribbean States (OECS), of specialists such as rheumatologists and nephrologists. She herself has had to visit other countries, such as Saint Lucia and Barbados, for specialist attention.

Bierzynski thinks that a grouping of OECS organizations dealing with lupus and other autoimmune illnesses, should be formed. The roles of the new entity, she suggested, should be securing more medical specialists to care for patients and to examine playing ‘an advocacy role’ in obtaining and stockpiling the medication needed by patients.

It’s believed there is a strong genetic predisposition to lupus. The most common form of the disease is Systemic Lupus Erythematosus (SLE), which can be either mild or severe, and attacks vital bodily organs.

Another type of lupus is ‘Discoid Lupus’, which affects the skin and hair. Lupus also can be drug-induced.

‘If you read the literature, it would tell you that lupus is a very difficult disease to diagnose. Very often, people go from one doctor to the other,’ said Bierzynski.

‘For example, you go to a doctor with joint pains and then you start having some kidney issues and you go to another doctor for that. And, your hair will begin dropping out and you go to a dermatologist. For years, nobody may connect the dots and you go from person to person, until they do a test for you to confirm that it is lupus.’

There are 14 markers indicating that a person may have lupus and should receive a medical diagnosis.

‘If you answer, ‘yes’, to three or more, then talk to a doctor,’ Bierzynski recommended. ‘If you have achy, tender or swollen joints for more than three months, get it seen to; or sores or ulcers in your mouth and on your skin; a low-grade fever for a period of time; chest pains while trying to take a deep breath and feel extreme fatigue. However, one of the main markers is the butterfly rash that affects the nose and cheeks in the shape of a butterfly.’

Bierzynski said an early sign of lupus also could be ‘lockjaw’; a phenomenon that happened to her.

‘You start to yawn and your jaw locks,’ she explained. ‘People are affected differently and the key to treatment is early diagnosis.’

At the onset of her illness, Bierzynski was deeply concerned, and really needed answers, on why her legs began swelling.

‘The doctors thought it was just some connective tissue disease. I kept on telling them that my father had thrombosis and the literature did not clearly point to thrombosis as part of lupus,’ she said.

‘Eventually, I had had an ultrasound and my doctor at the time suggested that they get me out of Grenada. So, we got out of Grenada and found out that I had blood clots in both my legs. Blood clot is one of the markers of lupus. It was a risk trying to travel on a flight while you have a blood clot.’

Bierzynski admitted that lupus is ‘not easy to live with’ but added that ‘it’s becoming more difficult to die from lupus because prognosis is a lot better these days. There is a lot more research and a lot more understanding of the disease.’

Lupus no longer is thought of as a ‘death sentence’ because of advances in technology, said Bierzynski. She said people also are being encouraged to engage in more healthy-eating practices.

Lupus patients also cope better, she said, with support; both support at the workplace and at home from spouses and other family members. While females are more prone to be affected by lupus, men and boys are not immune.

‘I met a policewoman, a member of our group, whose son at 14 has lupus,’ Bierzynski said. ‘He’s sometimes hospitalized. It is hard for her just doing the tests; downright hard.’

McDonald, now resident in Atlanta, Georgia, has had lupus for more than 40 years.

‘I was a 20-year-old when I was diagnosed. I was very sick. I just came down with arthritis in every joint. I was going to school at Howard University in Washington, DC. At Howard University Hospital, they diagnosed me within a few weeks,’ McDonald said.

‘I was hospitalized for a week or two weeks here and there and was missing chunks of classes. It was very stressful and I had to mentally prepare myself that I can only do so much. I would try to go and do the full day of classes; but, there were points at which you just felt you had no energy, like you hit a wall. I would leave at that time and just go home and try to rest a bit and come back the next day. I did graduate a semester late because of having to manage my workload.’

Over time, McDonald’s lupus symptoms have varied; from joint pain to inflammation of the scalp leading to hair loss; to skin rash to problems with her stomach, lungs and heart.

Properly handling stress and finding a balance in life, especially during her 32 years in a management position in high tech in the San Francisco Bay area of California and having to travel to Asia and Europe, have been important coping mechanisms for McDonald.

‘I had to make sure that I didn’t come back into the airport from travelling and go directly to the office, like many people try to do,’ said McDonald.

‘My lupus is usually in the most stable state when I have a balance. The balance is between good, restful sleep, getting exercise and managing stress; managing stress – meaning – I’m very aware of the number of things that I commit to in a given time. So, I’m not going to schedule four different events in a day; I might schedule two, so that I have a little time in between just to pause and rest; it doesn’t mean getting into a bed. It might be just sitting on a chair for a few minutes to reset before going on to the next thing. It requires a certain amount of awareness of how active I am and just remembering to put those pauses in my day and my life.’

McDonald and Bierzynski agree that exercising is important in living with lupus.

Because of her joint pain, McDonald avoids high-impact exercises. ‘No jumping around,’ she said. Instead, her routine has involved exercises such as swimming, biking, yoga, dance classes and walking.

‘For me,’ said McDonald, ‘being outside and being out in a green environment help. I usually try to go out and walk.’

Bierzynski, who normally doesn’t have joint pain, said she tries ‘as best as I can to manage; to live as well as I can with it. I am able to do aerobic exercises.’

According to Bierzynski, there are some things that a lupus patient must steer clear of. They include sidestepping stressful situations and also exposure to the sun.

‘Sun-exposure is bad; sun is the enemy of lupus,’ Bierzynski said.

If out in the sun, Bierzynski urges the wearing of a hat or the use of an umbrella and sunscreen.

In addition, ‘when you are tired you have to rest and also make sure you develop a relationship with a doctor’, Bierzynski said.