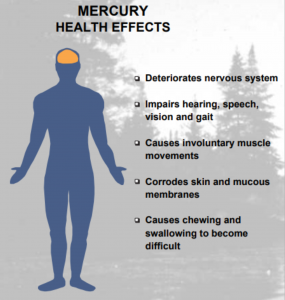 According to the World Health Organization, mercury exists in various forms: elemental (or metallic) and inorganic (to which people may be exposed through their occupation); and organic (e.g., methylmercury, to which people may be exposed through their diet). These forms of mercury differ in their degree of toxicity and in their effects on the nervous, digestive and immune systems, and on lungs, kidneys, skin and eyes. People may be exposed to mercury in any of its forms under different circumstances. However, exposure mainly occurs through consumption of fish and shellfish contaminated with methylmercury and through worker inhalation of elemental mercury vapours during industrial processes. Cooking does not eliminate mercury.

In the Caribbean, people are exposed to mercury primarily through:

The continued release of mercury into the environment from human activity, the presence of mercury in the food chain, and the demonstrated adverse effects on humans are of such concern that in 2013 governments agreed to the Minamata Convention on Mercury. The Convention obliges participating governments  to take a range of actions, including reduction of mercury emissions to air and to phase-out certain mercury-containing products.  Both Jamaica and St. Kitts and Nevis became parties to the Convention in 2017.