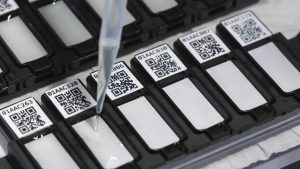 An allergy testing machine, the only medical equipment of its kind on the island, is now available to serve the needs of Jamaicans suffering from illnesses related to undiagnosed allergies.

“The machine, called the Allergy Explorer (Alex), will service Jamaica and the rest of the Caribbean as there is no other machine like this one in the Caribbean that is able to do allergy blood test,” consultant allergist, Dr Vincent Crump, told the Jamaica Observer in an interview last week.

But although the machine has been in Jamaica for a little over a year, Dr Crump said it is not yet operational because of a six-month rigmarole trying to get permission from the Ministry of Health and Wellness to put the machine into use.

“The lab that was meant to be operating the machine said we needed to get approval from the Ministry of Health. After about six months trying to communicate with the ministry, we were finally told that we didn’t need an approval. And in the meantime, the person who was trained to use the machine has moved on to another project.

“So, it’s just another of those situations where things like that take a very long time because, especially if it is something new, you speak to one person, and then you are past unto to another person and you end up going around in circles, only to find out that because the machine doesn’t use any radioactivity or anything that could be harmful, there should not have been any requirement for any specific approval to use it, so we were misinformed and now we have to wait to find somebody from the lab to be trained up to operate the machine,” the doctor explained.

Dr Crump said that with the prevalence of allergy-related illnesses in Jamaica, such as asthma, sinus infection, and eczema, the Allergy Explorer will allow Jamaicans to get a medical diagnosis confirming whether or not they have an allergy.

“About 25 per cent of the population might have some form of allergy and by allergies we mean things like eczema and allergic rhinitis. People in Jamaica would call it sinus. A lot of the people who think they have sinus issue they probably have allergic rhinitis due to environmental allergies.

“The problem with Jamaica is that we have a high prevalence of allergies but not many people know that they are suffering from an allergy. And quite often they will blame the wrong allergen, for example, a lot of people would think that their rhinitis is caused by milk when truth of the matter is milk is not a common cause for rhinitis. The rhinitis is usually something that you are breathing in from the environment.

“This machine that I have brought in would be able to test for allergens. From a tiny blood sample the machine allows us to test for 295 allergens. So it would give us an overall picture of all the things that that individual could be allergic to from that one blood sample,” said Dr Crump.

Presently, the doctor said that the blood testing for allergy is not available in Jamaica, outlining the tedious nature of the current procedure of getting this done.

“If somebody wants to have an allergy test done, they would have to have their blood taken at the lab and then that sample is sent up to Miami at a very high cost. So there is a time delay of getting the results and it is very expensive,” he said, adding that there are some 400 patients waiting to get a diagnosis on allergy-related illnesses.

“The current situation of having blood sent to Miami with results coming back that are not easy to interpret, is far from an ideal situation at the moment. The machine is needed so that patients that can get a confirmation of their diagnosis and a very comprehensive picture,” he added.