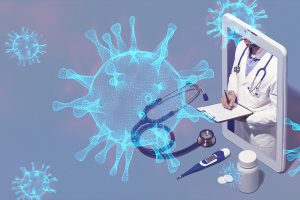 As the coronavirus outbreak overwhelms hospitals across the world, online medical services have become a valuable tool for connecting patients and doctors without placing further strain on the system.

“You’ve been prescribed 30 days of medication for dyslipidemia, how are you feeling?” a pharmacist at a Tokyo drugstore asked in March. The patient, a man in his 40s, was not across the counter but rather on the other side of an iPad screen.

The outbreak has forced industries across the world to adapt to a new normal, and health care has been no exception. About 1 billion online doctor visits are expected in the U.S. alone this year, according to Forrester Research — 28 times what was projected before the outbreak.

Teladoc Health, one of the leading U.S. providers of virtual care, charges $49 or less per visit. It now counts about 43 million users.

Meanwhile, China announced last summer that it would start covering telemedicine through public insurance. China had about 19 doctors per 10,000 residents in 2016, compared with 26 in the U.S. and 24 in Japan, and online care is considered a way to ease the shortage.

Telemedicine apps saw a 30% rise in users during the Lunar New Year holidays from a year earlier, according to a local research company. Ping An Good Doctor, one of China’s top apps, has over 300 million registered users and conducts about 730,000 virtual doctor visits a day.

“If it’s not something life threatening, online exams are easier,” said a 27-year-old in Guangzhou who recently developed rashes on her face. She paid 1 yuan (15 cents) for a 20-minute appointment, when a physical appointment likely would have taken 2 to 3 hours.

Japan began allowing doctors to see first-time patients virtually in April. Micin, an operator of a telemedicine platform, has installed its system at 3,200 facilities nationwide. But this change is temporary, and will be reversed once the outbreak is brought under control. “I hope the government creates a system that allows online care even after the coronavirus is contained,” said Tokyo-based doctor Hiroya Seta.