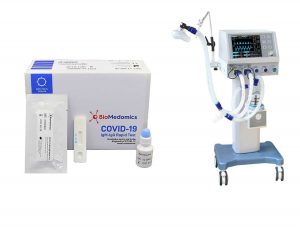 With ventilator production ramped up worldwide, hospitals in certain parts of the U.S. are now beginning to see a decline in the number of COVID-19 patients requiring intensive care, and with it, a decrease in demand for ventilators. Many providers are now turning their sights to increasing COVID-19 testing, with medical experts touting it as a solution for ending stay-at-home orders and allowing people to return to work.

This leads to questions about the surplus of ventilators leftover from the greater levels of production taking place. President Trump, who discussed a $2.9 billion program this week to build 187,000 ventilators throughout the year, says that the country will soon begin sending leftover devices to other countries in need, reported Reuters.

“We have so many now that at some point soon we’re going to be helping Mexico and Italy and other countries,” Trump said. “We’ll be sending them ventilators, which they desperately need.”

Demand for ventilators spiked in March across the U.S. as the number of COVID-19 patients outpaced bed capacity and the number of ventilators on hand at individual hospitals. The need led to states competing with one another and other countries in online bidding wars for the device and other supplies, as well as incidences of price gouging by certain retailers and individuals.

Many turned to the federal government for help, with New York Governor Andrew Cuomo at one point requesting that his state, which became the epicenter of the virus in the U.S., receive as many as 30,000 ventilators.

The federal government, in response, established a number of partnerships with various companies to boost production, including one with healthcare giants like Philips. Trump also invoked the Defense Production Act from the Korean War era last month to compel companies like General Motors to build ventilators.

Such efforts have helped hospitals obtain and use ventilators to care for their patients, with the Institute for Health Metrics and Evaluation (IMHE) predicting the U.S. now requires 16,631 ventilator units, a fraction of what the country plans to purchase, according to Reuters.

In light of the decline, states hit early by the pandemic are beginning the process of shipping ventilators to other states who now require them. Governor Cuomo just last week said his government would be sending leftover ventilators to Michigan and Maryland, both of which are starting to hit the apex of their individual case loads.

Trump also announced plans to send ventilators to Mexico following a discussion with President Andrés Manuel López Obrador. “I told him we’re going to be helping him very substantially,” he said, according to Reuters.

While a positive sign, experts warn that demand could once again rise should there be a second wave of infection or an immediate rebound after social distancing protocols end. This scenario is especially concerning as some states forgo warnings and begin to reopen their economies earlier than recommended.

Manufacturers continue to ramp up production levels and establish agreements with the U.S. Department of Health and Human Services. These include Zoll, a unit of Asahi Kasei Group, which has boosted production by 25 times to 10,000 units per month; and Resmed, which has agreed for $32 million to produce 2,550 ventilators by July 13.

“The idea is not only to make sure we in the U.S., but also around the world, have them if, God forbid, something like this should ever happen again,” said Hill-Rom spokesman Howard Karesh, whose company has signed an HHS contract to manufacture noninvasive ventilators, and has increased production by five times the number it produced prior to the pandemic. He predicts it could be months before the health crisis ends.

Some records show HHS ventilator contracts were single-source and had no competitive bids. The White House said this was due to the urgent need for ventilators.  t is unclear how many of the 187,000 ventilators are invasive versions.