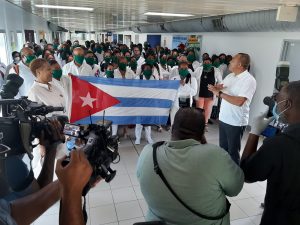 Cuba has long been renowned for its medical diplomacy with thousands of its doctors working in medical missions around the world where it is estimated that more than 30,000 Cuban doctors are currently active in 67 countries including Africa, Latin America and the Caribbean.  Cuban cooperation started out in Jamaica in 1976 with 14 doctors and has significantly expanded where there are some 300 Cuban health professionals including doctors, nurses, technicians, and biomedical engineers currently providing services in government hospitals and clinics throughout Jamaica. Now the Cuban medical mission in Jamaica will be increased further with the addition of 290 new physician specialists.