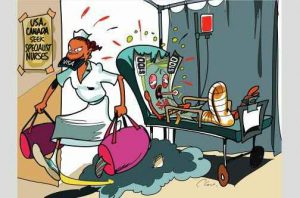 Nurses are the backbone of Jamaica’s public health system and many have earned the reputation of being among the best in the world, so it’s no wonder that they are being aggressively recruited for international destinations where there are serious nursing shortages in developed countries like the UK, Europe and North America. The Jamaican Observer newspaper reported in 2017, that between 2015 and 2016, the public health system lost over 200 nurses including more than 170 specialists.  Now in 2019, almost 100 more nurses migrated for greener pastures. The reasons for this chronic migration are well known and documented where better salaries and working conditions and better benefits are offered which the government cannot match or find effective solutions to retain nurses to continue working in the system.