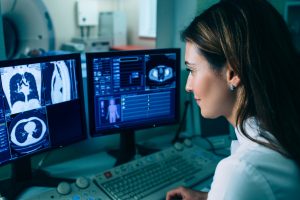 The COVID-19 pandemic has left many private radiology practices questioning their future existence, according to a special report conducted by the Radiological Society of North America COVID-19 Task Force.

Examination volumes, which private radiology practices depend on heavily for revenue, have dropped 40% – 90%, and the reduction is expected to continue anywhere from a few months to a few years.

“Private radiology practices concentrate their business on performing and interpreting imaging examinations, and many of them do not have tremendous reserves to buffer the impact of a crisis that significantly reduces exam volumes, such as a global pandemic,” lead author Dr. Richard E. Sharpe Jr., senior associate consultant at Mayo Clinic in Scottsdale, Arizona, told HCB News. “Some larger multispecialty, academic or hospital-based practices also experienced decreases in imaging volumes, but losses in imaging in some cases could be buffered by increases in utilization of other healthcare services.”

One practice that Sharpe and his colleagues assessed had three outpatient imaging centers in Michigan that performed and interpreted approximately 55,000 exams per year in 2019. Performing 1,165 between January 6 and March 22, the practice saw this number drop by more than half when the pandemic hit, and was only able to conduct 520 between March 23 and May 3. The decrease began to reverse in April, with the practice interpreting an average of 913 exams per week between May 4 and May 10.

The same trend was also observed in its work relative value unit (wRVU)-based payments, which went from 1,144 per week between January and March to 406 between March and May. wRVUs went back up to 815 each week between May 4 and May 10.

These patterns were attributed to not just low volume but measures taken to reduce the practice’s expenses, including decreases in office hours and daily radiologist work hours. It also paid radiologists per-wRVU and part-time technologists on an hourly basis; renegotiated service contracts to account for pandemic-related periods of very low equipment utilization; and relied on funds provided by the Centers for Medicare and Medicaid Services Accelerated and Advance Payments Program to reimburse providers for expected future services.

These are a few of the same tactics recommended by the authors and implemented by several radiology practices. Others include reductions in salary for radiologist and practice executives, requiring unpaid leave, eliminating or reducing bonuses, and suspending investment and system and infrastructure improvements.

These alone, however, are not enough to curtail the full impact. Practices also require greater unification in their interpretations of state-level practice guidelines. For example, even in areas hit early like Seattle, a portion of practices maintained elective imaging appointments, while others requested that all elective imaging be rescheduled. Some rescheduled only screening exams, and one group told patients to reschedule only if they had symptoms of COVID-19, according to the report.

Sharpe adds that practices should be adaptable to change, offer a variety of services, and be willing to make quick and difficult decisions.

“Successful practices are likely to be those that are diversified in their services, geographic regions, and practice settings in which they provide care. They will also demonstrate a culture that is adaptable, resilient, team-oriented, and capable of making tough short-term decisions to adjust cost levers and seek additional financial resources when appropriate.”