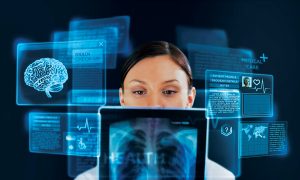 (Reprinted from the January/February issue of HealthCare Business News magazine)

Dr. Eric Brian Friedberg and his colleagues in the  American College of Radiology’s (ACR) Commission on General, Small, Emergency and/or Rural Practices spend a lot of time thinking about ways to improve access to imaging in underserved regions. Teleradiology holds a lot of potential for that, so they asked the question: to what extent is it actually being used?

To get their answer they sent a survey to ACR members and received almost 1,000 responses. Over 85 percent of the radiologists surveyed, (and these were all radiologists who did not identify primarily as “teleradiologists”) had some experience over the last decade with practicing teleradiology. HealthCare Business News spoke to Friedberg, who is the vice chair of the commission, about what those findings tell us about the evolution of teleradiology, and what it could mean for the future of imaging.

HCB News: We sometimes think of teleradiology as a niche segment of radiology but your findings seem to contradict that view. Were you surprised that such a high percentage of respondents were using teleradiology?

Dr. Eric Brian Friedberg: Not at all. We all appreciate the value of this tool. Being able to bring together a diverse group of skill sets through an integrated platform means you don’t need all these bodies physically adjacent to one another. It allows for a lot of cross fertilization, but on an even more fundamental level it allows for reading exams for sites that you’re remote to. So when you think of 24/7 coverage and holidays, sometimes it’s hard to maintain that on-site presence when you have smaller numbers of physicians in the loop.

HCB News: You mention in your study that it’s difficult to compare your findings to those of prior U.S.-based research, and cite “differences in the definition of teleradiology, and an emphasis on practices rather than individuals” — how did you define teleradiology and how is that different from other previous researchers?

EBF: We defined it as “anybody who is reading remote from the site where they’re practicing,” rather than folks who have a core business in teleradiology — which would mean their services are specifically focused on supporting other groups; they’re providing over-reads, doing the nitehawking and dayhawking to provide preliminary reads. What’s interesting is that the industry has evolved extraordinarily over the last decade, where now teleradiology is used to provide final reads — meaning you see the study, you read it, and that’s the final report.

You’re no longer necessarily giving a preliminary read for management needs, you’re providing a report that is inclusive of all the findings and all the issues that need to be addressed over a much longer term, issues relating to chronic challenges that may not need to be immediately addressed.

HCB News: Would you say that teleradiology has become a fundamental part of being a radiologist?

EBF: It’s a statement of fact. The ability to perform readings remotely is just like how we use the internet: buying things or talking to Siri, or applications for AI that we use in our lives without even thinking about it. Any time you have more people who can freely communicate and review information in a collegial collaborative manner, it makes us stronger and enhances our ability to deliver quality care.

HCB News: We often hear that AI may replace radiologists in the near future. We also hear AI is providing an invitation for radiologists to step out from behind the screen and interface more with patients. Does an increase in teleradiology complement that vision or compromise it?

EBF: There’s an idea that has circulated for a few years now, that AI could replace radiologists. Well, if AI can replace radiologists it will replace paralegals and engineers and many others, it will be so disruptive to our economy and entire economic structure. Things have got to work together.

AI is the capability for software programs to have self learning capabilities and higher levels or processing data that allow for better assisting humans in doing tasks that historically only a human could do, such as troll medical records for salient past medical history and other relevant clinical findings that are pertinent to developing and interpreting information at hand.

Teleradiology and AI complement one another; teleradiology is the ability to transmit data electronically and review it anywhere. For most of us teleradiology is a tool that allows us to review studies and report on those findings with other software packages, such as voice recognition, and you can have different ways of handling the data, the reporting. Having AI running in the background should make everything more efficient.

HCB News: One-third of your respondents noted “technical interpretation standards” as being a key to improving teleradiology. What might those standards look like?

EBF: We need standards just like in other industries. As you come up with a mission critical technology you want the ability for it to be utilized and adapted for different environments and this is what we want for teleradiology. Right now we have all these different platforms and they need to interface, and as folks get out in front they develop proprietary technology. This can lead to certain innovations that some providers can’t utilize due to compatibility issues, and the cost to solving those challenges is prohibitive.

You want standards generated in a manner where these kinds of innovations become more accessible and the ability to integrate them into the EHR has a lower barrier to entry. That’s the goal — but how you do it is very complicated. From a business perspective and a care perspective, you’re seeking commonalities and opportunities that will be helpful to all.

HCB News: Does your research change the overall understanding of teleradiology in any way?

EBF: People should understand that teleradiology is an important tool. When it first came into healthcare there were a lot of concerns about how that tool might be utilized. Many saw it as potentially providing a way for large entities to hurt practices in a way that had not been seen before, but that’s not the way, in general, this has played out at all.

Teleradiology has been very useful in helping smaller groups where they may have a unique need, and to fill that gap in a way that is economically feasible. Larger providers have worked hard to fill a niche that is all about quality of care, and business should follow, and it’s been synergistic with private practice groups that are on the ground. It has been an overwhelmingly symbiotic relationship.